After allowing the dust to settle after a nerve-wrenching and dramatic series between England and South Africa the post-series report will probably depend on whether you're a half empty or half full kind of guy.

If you're half-full then a creditable 1-1 draw against the world's second best test playing nation is a worthy result. The resilience and character shown in the first and third test, where England clung on for dear life, is an encouraging sign of a healthy team spirit while the sole victory in the second game came in convincing fashion. Things could have got even better had they not collapsed so grimly on the fourth day of the final test at Johannesburg. Stormy weather enveloped the city in the afternoon which clung on the following day, meaning any further play would not have been possible. It perhaps would have been a hollow victory but a win nonetheless and would have gone in the record books alongside a 2-1 Ashes win last year.

If you're half empty then this was a series that England were lucky to escape from. Out played in three of the four tests and behind in virtually all of the bowling and batting stats, a combination of gutsy batting, poor bowling and a few slices of luck meant England somehow came into the last test with a 1-0- lead. The batting line-up however still appears brittle and refuses to click at the same time – while one or two will get a score, others will fail.

The two South-African born players, Kevin Pietersen and Jonathan Trott, have struggled in particular. However they do have excuses, with Pietersen returning from serious injury and Trott still a rookie at this level. A trip to Bangladesh should help them build confidence and the cricket odds suggest an easy win for England.

With the ball Graeme Swann was the leading wicket-taker and has quickly established himself as a key player, shown by his high value in the upcoming IPL auction.

But the swing-masters, who caused so much damage last summer struggled to get as much movement on the harder South African pitches. How England could do with a Dale Steyn or Morne Morkel to slam down some vicious deliveries.

But it would be unfair to criticise the team too much considering the amount of guts and determination they showed to dig out results in three of these four tests. Problems remain, but they are much easier to solve when you are not losing Test series. If the cricket betting is right, England should be able to build on this performance.

Written by Philip Oliver 17 musings
Email ThisBlogThis!Share to TwitterShare to FacebookShare to Pinterest

Is Cook the right man to lead England? 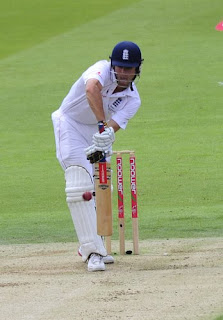 Essex batsman Alastair Cook is set to lead the England side on their tour of Bangladesh in what national selector Geoff Miller describes as "an audition for future engagements".

With Andrew Strauss taking a break from the rigours of the international game, Cook was seen as the natural choice to take over his duties as captain.

Although the cricket betting still makes England strong favourites to win the series there are fears the decision to rest Strauss could backfire in Bangladesh.

However, England team director Andy Flower thinks Cook is up to the job.

He said: "Alastair is a tough young man - I think you've seen that in the way he's batted and handled himself from the moment he joined the England team. In my judgment, he is a natural leader."

Since making his test debut aged 21 Cook has been a mainstay of the England side, opening the batting and averaging a very respectable 42.65 at test level. He has also clocked up ten centuries. Despite this, Flower concedes that Cook will need to develop into the role of captain.

He said: "I think on the field he'll be respected by his players. He'll have to grow into learning the tactical game, of which he's had very little experience."

Although Cook looks to be a permanent England Test skipper in the making, eyebrows have been raised at the notion of him also leading the one day side.

Having played in just two ODIs in two years Cook is hardly a regular starter, yet he will lead England in their 50-over clashes in Bangladesh.

With the World Cup due to take place in India, Sri Lanka and Bangladesh in just over a year it may prove to be a mistake to hand an opportunity of captaincy to a player like Cook who could struggle to break into England's World Cup team.

However, the online sports betting experts view England as relative outsiders when it comes to that tournament and the powers that be might have one eye on the future.
Written by Philip Oliver 24 musings
Email ThisBlogThis!Share to TwitterShare to FacebookShare to Pinterest

Is Kieswetter a South African too far?

The news that the South African-born Craig Kieswetter has been called up to the England Lions tour has sparked controversy.

The wicketkeeper-batsman is expected to challenge for a place in the one-day team over the next year and if he succeeds he will join South Africans Kevin Pietersen and Jonathan Trott in the England fold. On top of this captain Andrew Strauss and current wicketkeeper Matt Prior were both born in the country and have a South African parent.

National selector Geoff Miller said: "We have got to get to the stage where we are very careful on that [the number of South Africans in the England team], and we will be."

So should the England team strictly be a preserve for the truly English? Personally, I feel that the team is reflective of the cosmopolitan nature of the country. If someone is qualified to play for England and are good enough, then we shouldn't hesitate in picking them, regardless of their heritage.

It's hardly a new phenomenon. Both Alan Lamb and Robin Smith were South African born players with English parents who represented England during the apartheid ban.

The team of that era also saw the likes of the West Indies' born Chris Lewis, Devon Malcolm, Gladstone Small and Phillip DeFreitas appear, and the former captain Nasser Hussain was born in Madras.

The current concern is that there will be more Afrikaans accents than English in the dressing room, with Kieswetter and Trott having represented South Africa at under-19 level.

English fans might struggle to get behind a fully South African team, but I tend to think that the number of South Africans currently available for England is an anomaly rather than a trend and I can't see anyone in cricket betting otherwise.

Our selectors should just carry on picking the best players available to them, regardless of history or passports.